The People Behind the Jackson Field Center

We are proud of our experienced professional staff and would like to introduce them to you.

The Annual Follow-Up (AFU) staff are the people who call every year to ask about the health of the ARIC participants over the previous year.
Ms. Delores Sebren is the AFU data analyst. She has been with ARIC since May of 2009 and is active in updating data collection processes, forms and participant information. Prior to joining ARIC, Ms. Sebren worked with UMMCs Metabolic Clinic/Diabetes Clinic as program coordinator and data analyst for the Delta Diabetes Project. The data collected from the Delta project sites identified healthcare disparities in various socio-economic settings.
Ms. Mattye Watson is an ARIC researcher and one of the people responsible for your yearly follow-up calls. She has been with the ARIC study for 21 years. Ms. Watson began working with ARIC by conducting home interviews with participants before joining the AFU staff. Ms. Watson has a BA from Tougaloo College and a Master's Degree from Jackson State University. She is responsible for maintaining contact with study participants.
Ms. Dorothy Washington is also a researcher and has been with ARIC for 19 years. She also began her career with ARIC conducting home interviews prior to joining the AFU staff. Ms. Washington has a BA from Jackson State University. She is also responsible for keeping in contact with our participants and conducting follow-up telephone calls.
Ms. Agnes Hayes has re-joined ARIC staff in AFU. A medical center veteran of 26 years, she has spent 11 years with ARIC working in clinical operations and surveillance. On her return to AFU as a researcher, she assists others on the study by helping keep track of the cohort members, data, and other information gathered in the study. 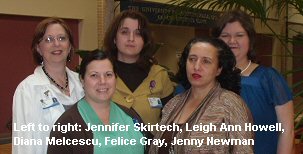 The Community Surveillance staff obtain and review medical records to determine the occurrence of heart attacks and deaths related to heart disease in ARIC participants and the within the Jackson community.
Ms. Jennifer Skirtech is the surveillance supervisor and reviews medical records for hospitalized hearts attacks and in-hospital deaths related to heart disease. Ms. Skirtech has worked with the ARIC study since 2005. She is a registered nurse and has several years of clinical research experience.
Ms. Tammy Coker investigates deaths that occur outside the hospital. In doing so, she reviews coroner reports and performs interviews with next of kin. Ms. Coker has worked for the ARIC Study for the past 10 years in several capacities including surveillance, annual follow-up, and the ARIC MRI ancillary study. Ms. Coker is a practical nurse and attended Jones County Community College. She later obtained a BS in Clinical/Counseling Psychology from Mississippi College. She is certified in medical record abstraction and came to the ARIC Study with experience in abstracting, home interviews, and had several years of experience as medical staff, credentialing, and QI coordinator.
Ms. Leigh Ann Howell joined the ARIC Study in July of 2007 and is a licensed practical nurse. Ms. Howell is a certified medical records abstractor and collects data on cardiovascular heart disease events at area hospitals. She brings 10 years clinical nursing experience to the surveillance team.
Ms. Felice Gray joined the staff in September, 2006, as a medical records abstractor. She is a licensed practical nurse with 9 years experience in utilization review. 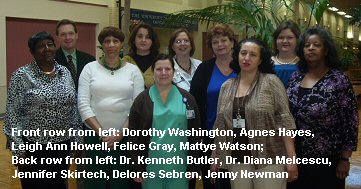 Ms. Gray is a certified professional in utilization review and has professional certification in utilization management.
Ms. Jenny Newman joined the ARIC staff in May of 2009 as a medical records abstractor. Prior to working with ARIC, she worked on the KPAVE Study. Aside from her duties with ARIC she is an adjunct professor of psychology.
Dr. Diana Melcescu joined the surveillance staff in September 2008 as a medical records abstractor. Dr. Melcescu studied medicine in Timisoara, Romania before immigrating with her family to the United States.
Dr. Kenneth Butler joined the ARIC study in April of 2004 as a project administrator and publications coordinator. He is an assistant professor in the Division of Geriatric Medicine. Dr. Butler brings significant laboratory and health sciences research experience to the team.
Dr. Alan Penman is an associate professor in the Department of Medicine (Geriatrics) where he works as epidemiologist and biostatistician. His prior experience includes work in epidemiology and preventive health for the Centers for Disease Control and Prevention (1993-1996) as well as medical and surgical positions in Scotland, South Africa, and Jamaica.
Dr. Cameron Guild is a board certified cardiologist and co-investigator of the study. Dr. Guild serves as a reviewer on the ARIC MMCC. He has been associated with the study for three years.
Dr. Ervin Fox is a board certified cardiologist and serves as a physician reviewer on the ARIC MMCC. Dr. Fox has extensive research experience in cardiovascular disease. He has been affiliated with the study for 5 years.

A Brief History of the Jackson Field Center 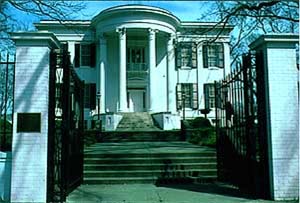 The vision for the Jackson Field Center began in 1985 with Dr. Richard Hutchinson and Dr. Robert Watson. Dr. Hutchinson (Principal Investigator) and Dr. Watson (Co-Principal Investigator) developed the competitive research proposal that resulted in the ARIC Field Center being established in Jackson at the University of Mississippi Medical Center (UMMC). After leading the study for over 12 years, Dr. Hutchinson is now a Professor Emeritus. He continues to consult on ARIC and related studies at UMMC. Dr. Watson has retired, and worked on his farm in the country outside of Jackson until his death in 2009.
Dr. Dan Jones led the study from 1997 to 2000. Dr. Jones is now the Chancellor of the University of Mississippi. Dr. Andrew Brown led the study from 2000 to 2003. Dr. Brown continues as faculty in Internal Medicine at UMMC and is pursuing research interests in the prevention of medical errors. Dr. Thomas H. Mosley, Jr., assumed leadership of the Jackson Field Center in 2003. Dr. Mosley first began working with ARIC in 1993 under the mentorship of Dr. Hutchinson. Dr. Mosley is the Associate Director of the Division of Geriatric Medicine at UMMC.
Over the 20 year history of the Jackson Field Center, a number of staff and investigators have worked with ARIC and made an important contribution to the overall success of the study. With warm memories of each, we thank them for the hard work and dedication. We have put together a list of those that have played (or still play) an important part of the Jackson Field Center.

The city of Jackson (http://www.visitjackson.com) is located 211 miles south of Memphis and 189 miles north of New Orleans. Jackson is the capital of the state of Mississippi and the states largest city with a metropolitan population of 495,000 of which approximately 200,000 reside within the city limits of Jackson.
The University of Mississippi Medical Center (http://www.umc.edu) occupies a 164-acre tract of land in the heart of Jackson, and consists of the Schools of Medicine, Nursing, Dentistry, Health Related Professions, and Graduate Studies. The total student body has 2,400 students of whom 400 are in the School of Medicine. The total employment of the medical center is 8,500 full- and part-time employees, with 450 full-time faculty in the School of Medicine alone. Since 1997, several major construction projects totaling over $200 million have been completed.